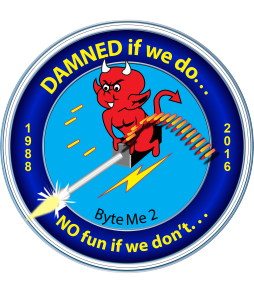 A little History of The Damned

The Damned formed as a squad in 1988. Damned Ptero founded our original squadron on Air Warrior, the first multi-player air combat simulation. Since that time, the we have grown to include hundreds of players in many online games. We also have squads in Ace’s High, World War Two Online, and Call of Duty. In fact, when a beta test begins for a new multi-player game, you can be sure that we will send a team to check it out and report back to our members. In recent years, many of our members have ripened, in some cases fermented, and we are a bit smaller than we once were. That can be expected after 28 years! The end result is that we are the longest continuously existing online gaming squad in the world.

Our creed is Fair play, Honor and Loyalty. We don’t take ourselves too seriously though. Strict participation rules or a military chain of command aren’t our style. Rather, we enjoy teamwork and helping others learn the games we play. Our CAG (Commander Air Group) is a guy formerly known as Damned Kegger and known today as Damned Buttwidget (when asked, he says that his name represents the fact that he is a ‘weapon of ass destruction’ – whatever that means).

To keep track of all of our activities, we maintain multiple websites and e-mail servers. Posts from Europe, Australia, New Zealand, Canada and the United States suggest missions, ask questions about games or hardware and joke around. The Damned don’t actively seek recruits, we just sort of ‘find’ people while we play. Our only requirement for membership is that we have fun playing together for a while. After all, as our motto states…